Music is different. Somehow primitive, such as Dub-step, but in continuous change. The sounds meaander, nothing remains as it is. Electronically. Shimmering and bulky. There is no DJ, no act, no stage! People standing, sitting or lounging on sofas, in their hands smartphones or tablets. Moving video Beams. They throw some light only partially abstract images in the room or on the people, some of them wear 3D glasses. The projectors seem to look for groups. Wherever there is a large crowd, they are centered. Dancing, holding a smart phone in her hand, with excessive movement of the arms. And again and again the beamed letters. 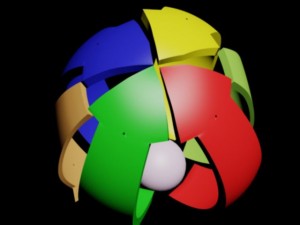 Once you unlock the phone it shows a ball that changes according to the music in his formation. Sometimes like a flower, then again with many peaks, iridescent, constantly changing. Cross out his hand over one of the formations, changing the entire audible sound on the premises and slides into another expression. It always comes back to small variations. And less accentuated.

After double develops from the figure, a transformed rhythmically ball consists of four arrows, the tips pointing at one pole and at the base of a ball, which defines the other pole. In addition, two more that show the ball-pole. Slider. If you touch one, the surface changes as if it were mercury – suggests light waves corresponding to the frequencies. They can bend its length, spherical. And has volumes of groups of instruments in hand and pulls away the drums. A short time without a beat, it swings the arrow again. It is sound, the audience like the beat. That they generate themselves, however.

The Fondling
Double click on the ball-pole. Using arrows you get into the center of this universe. Each self is the center of the system. And all around, there are solar systems that manifest the different instrumental groups. Double. I’m the drums. Then change structures and sounds. 100erte regulator at depth. Expert system for the knowledge to be part of it all: Bass. Chord. Melody. It is the Fondling, many parameters, much expertise, expert mode. It needs a lot of love, because it is abstract and whether the rarity yet concrete. Others can join them.

The Fondling makes the style. the Fondler the trays with. Cool, existentialist distinguished. They are the center of the system. Ifs not there a system would: A2R! This suggests!

The Spiner
= Dancers accelerator. Physical effort. Sensors. Very vague. No structure. By moving the smartphones & Co., the system is impressive.

The Twister
The Twister only have small boxes on their displays. This can make the twist longer or shorter. And just by changing the location of the smartphone in the room to spread the structures or contract. Changes in the rhythmic and harmonic structure by small movements or tilting the mobile

The scooter
The scooters have a smartphone through your fingers. They are like Junglier, twirling it, intervene only in the sound, its events are synchronized by the system. As the shufflers are less sound-savvy, this event-oriented and sexy.