The countries who took part in the Hague Conventions of 1899 and 1907 accepted to refrain from using „projectiles the sole object of which is the diffusion of asphyxiating or deleterious gases“. These Conventions, however, have been widely ignored and the use of gases in WWI has been recorded as early as 1914.

Chemical warfare was started by France in August 1914, when tear gas grenades (xylyl bromide) were used to slow down the German army advancing through Belgium. Poisonous gas however didn’t appear on the battlefield before April 1915, during the second battle of Ypres, when the German army sent a chlorine cloud against French lines.

Overall, about 124.000 tons of chemical agents have been used during WWI., both lethal and non-lethal. The casualties amount to over 1 million injured and 90.000 dead. Whereas the huge gap between the number of soldiers exposed to gases and the actual amount of fatalities allows to question the effectivenes of such weapon, its brutality is undeniable. 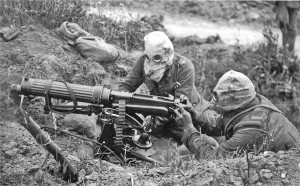 The first „guest“ of this episode is Johann Görtemaker, German soldier. In a letter from 26th August 1917 he relates a special tactic used by the enemy in Flanders. The British combined poisonous gas clouds with harmless smoke screens in order to cover their movements and disorient the German army. Listen:

More information on Johannes  Görtemaker is available at http://www.europeana1914-1918.eu/de/contributions/462, togehter with a transcription of his letters.

The second „guest“ is Maurice Leclerc, a French soldier who was exposed to  irritating gas in June 1916. On the next day he wrote on the accident in a letter to his family. The gas shell fell 20 meters in front of him, and Leclerc couldn’t avoid the cloud. His eyes and lungs were affected for a few hours but he was able to recover quickly. Listen: 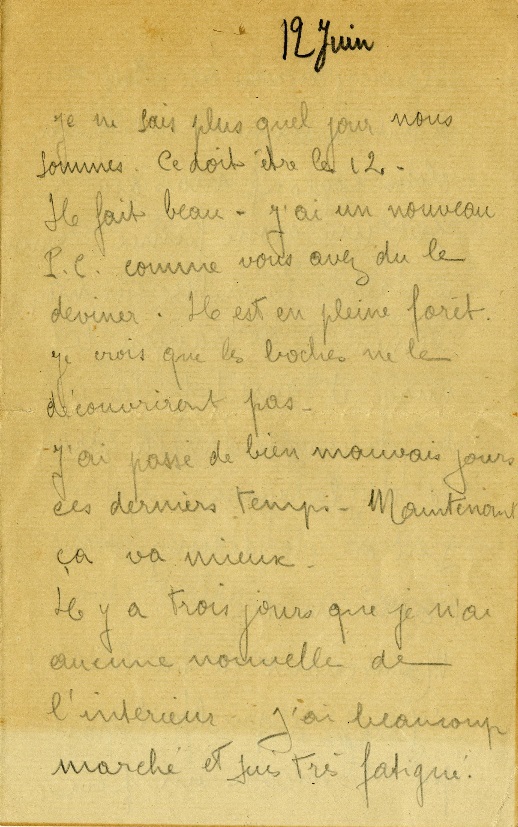 The third account on chemical warfare comes from a British veteran, Arthur „Slim“ Simpson. In an interview recorded in 1981 he recalls being exposed to irritating gas and suffering a few days from the effects. Listen:

The last document is a letter from Guido Sampaolo (see episodes #1 and #4), dated 8h July 1915. He denounces a broad usage of poisonous gas from the Austrian army, as well as the lack of gas masks among Italian troops (he claims that in his sector only 2 masks every 15 men were available). Sampaolo also writes that the gas masks were not always effective, and could not ensure full protection for the soldiers. Moreover, they also had to suffer the awful smell of corpses: the enemy was occupying a ventilated high ground and didn’t allow the dead to be buried. Listen: 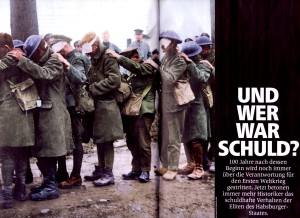 During WWI, 10 billions letters were exchanged between the soldiers and their families. Several millions a day. For comparison, the amount of shells shot in 51 months of war is estimated in about 1 billion. However, the military mail didn’t only deliver letters and postcards: supplies were very scarce on the frontline, and soldiers had to ask their families for help. Therefore, millions of parcels were sent every week, each one containing food and/or warm clothes, underwear, cigarettes, etc.

The episode of this week is entirely dedicated to military mail and relief packages. Despite being written on three different fronts (Eastern, North-Italian, Western), the texts we have selected are all depicting a very similar situation. 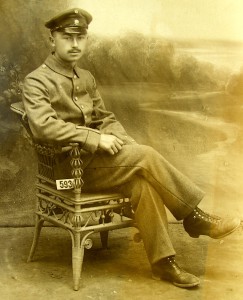 Our first „guest“ is the German soldier Philipp Schopp.  Deployed on the eastern front, he fought in Galicia for about one year. When he died in June 1916 he wasn’t yet 21.

The second letter was written in summer 1915 by Guido Sampaolo, an Italian soldier who managed to survive the war and later raised a prosperous family.

The last letter was written on the Western front by Fritz Niebergall, a German soldier who died in France in 1918, aged 24. (see also episode #1) 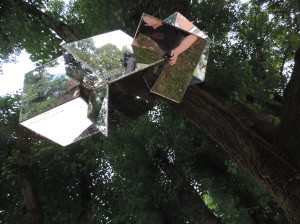 During WWI many new weapons and techniques were developed: not only better rifles and bigger cannons, but also technological breakthroughs that would change the modern warfare forever, like tanks and aircrafts.

It must be said, for sake of completeness, that the use of flying devices for scouting and bombing was not unknown at the time: France started using balloons for observation as early as in the 18th century. Moreover, the first attempt of an aerial attack took place on July 2, 1849, when Austrian balloons loaded with incendiary bombs tried to set Venice on fire. The endeavour didn’t succeed because of strong winds, but it is commonly mentioned as a milestone.

The first self-powered and manned plane was successfully tested by the Wright brothers on December 17, 1903.  The flight only lasted 12 seconds (36 meters), but eight years later the Italian army could already pioneer the military use of aircrafts during the Italo-Turkish war. By the end of WWI, all of the main countries involved had developed their own air force.

The first „guest“ of this episode is the French veteran Émile Dupond, former lieutenant of the 45th company of tethered balloons, who shares some war memories in a tape from 1971. In the selected passage he recalls three interesting episodes:

First: a Navy officer (probably Constant Duclos) goes to every company to demonstrate the use of a parachute. To do so, he would jump out of the balloon from a height of 1500 meters (4900 ft). Parachutes were still experimental at the time and soldiers didn’t put any trust in it.

Second: a German aircraft once split the balloon in half with the fire of its machinegun. The crew managed to escape thanks to the parachute and landed behind the French lines unharmed .

Third: the German ace Manfred von Richthofen once set the balloon on fire.

The second „guest“ is Michael George Lill, a German soldier who fought on the Western front near the border between France and Belgium from 1914 to 1916. He survived the war but three members of his family were killed in action. The journal entry we chose is from 14th March 1916. At the time, Lill’s unit was deployed at Carvin-Épinoy, where it was hit by an aerial bombing.

the third contribution is also dated March 1916. In a journal entry, the Italian officer Attilio Frescura relates the comical attempt of a colonel to camuflage Italian batteries under sheaves of straw. But as Frescura sarcastically points out, straw doesn’t grow on the mountains, and the solution gives away the position of Italian guns instead of concealing them.

Frescura’s journal has been published and is available at: teca.bncf.firenze.sbn.it/ImageViewer/servlet/ImageViewer?idr=BNCF00004006672#page/75/mode/1up

The last testimony comes from British veteran Leonard J. Ounsworth. In a passage of a longer interview (available at: ) he recalls how dogfights used to take place in the evening, just above the trenches. He has a clear memory of a German plane loosing both wings, catching fire and crashing like a blazing torch behind English lines.

The full interview is available at: http://www.oucs.ox.ac.uk/ww1lit/gwa/document/9404?REC=4.

Voices in this episode: Émile Dupond as himself, Norbert K. Hund as George M. Lill, Matteo Coletta as Attilio Frescura,  L.J. Ounsworth as himself.